This Week’s Features: The Enigma of Human History

As many postmodern writers like Umberto Eco claim, the history familiar to us is merely an artificial construction and thus a ‘reality’ made out of falsehoods is crafted. The postmodern notion of history as an accumulated product of multiple falsehoods reflects on our role in contemporary society. Are we puppets living under the control of the invisible hand?

It has been rumoured that 3 days before his death, Stanley Kubrick admitted that he made a movie that nobody is aware of even they have all seen it – the Moon Landing. One of his timeless blockbusters The Shining appears to be just a classic horror, but the endless symmetries and repetitions filled with fantastic images in the film also appear to be a metaphor that illustrates how the American bureaucracy has repressed his creativity, and how his creation of artificial history has haunted his conscience.

The Fantastic Symmetries and Repetitions: The Conspiracy Theory of the Moon Landing in Stanley Kubrick’s The Shining

Italo Calvino’s Invisible Cities implies the power of human imagination through an imaginary universe consisted of numerous surrealist cities. In this novel, Calvino portrays a number of cities that are made up of two groups – the usurpers and the suppressed. The surrealist and grotesque phenomenon occurring in those cities further elaborate that history is a conspiratorial political tool manipulated by totalitarian regimes to ensure social orders.

Extensive Reading:
The Conspiracy of Artificial History as a Political Tool in Authoritarian Regimes: The Manipulation of Social Orders in Italo Calvino’s Invisible Cities 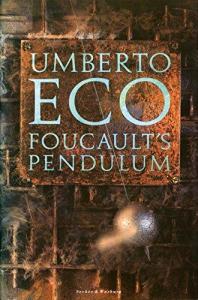 Because of the blurred boundaries between historical facts and legends, the Knights Templar have become a very popular subject for postmodern mysteries. Borrowing from this idea, Eco uses the Templars to compose a satire that parodies the metanarrative relationships between forgery and fictional writing in this novel.

Constructing Human History through Intertextuality from Nothingness: The Falsehoods of Metanarrative in Umberto Eco’s Foucault’s Pendulum

Like Loading...
‹ A Brain Made Out of Straight Lines: The Curious Incident of the Dog in the Night-Time
The Cinematography of Chaos: Literature Reinvented by the Reader in Alain Robbe-Grillet’s Jealousy ›

This site uses Akismet to reduce spam. Learn how your comment data is processed.